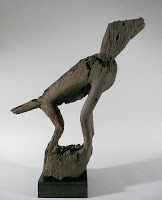 Along with about 50 other dealers, I recently exhibited at the Los Angeles Asian & Tribal Arts Show, held annually in November at the Santa Monica Civic Auditorium. The show is produced by the Caskey Lees organization, based in Los Angeles. The show is a mix of classic Asian art and tribal art from Africa, Asia, the Americas, and Oceania. My report will focus on tribal art.

A short list of the dealers that exhibited: LA Tribal members: John Strusinski of Primary Source, Ron Normandeau of Anthropos Gallery, Philip Garaway, Joshua Dimondstein, Fily Keita and of course, myself, along with Michael Hamson (CA), John Ruddy (NM), Georgia Chrischilles (Belgium), Joe Loux (SF), Craig DeLora (NJ), Neil Becker (NY), Kip McKesson (Tanzania), Casey Waller of Caravanserai (TX), and first time exhibitor Bill Sutterfield (CA). A complete list of the exhibitors can be found on the Caskey Lees website.
There seemed to be more exhibitors displaying tribal art this year, which in my opinion is a good thing. Tribal art is so much more exciting than boring displays of old Ming vases! Ha! In fact nearly all of the extra public display areas showed tribal art, including a collection of rare wood sculptures from the Central Highlands of Vietnam (in the central garden) and an unusual grouping of Nepali farmer’s rakes fashioned from tree branches (in the lobby). Full disclosure: I contributed these items.
Other notable objects were a collection of Dayak shields and Indonesian weapons brought by Bill Sutterfield, a beautiful female Tau-Tau offered by Primary Source, incredible gold jewelry from Georgia Chrischilles, and a massive log drum in Michael Hamson’s booth. As usual Ron Normandeau had a fantastic array of pre-Columbian and Northwest Coast objects and Phil Garaway offered a very rare and subtle Navajo blanket picturing an unfinished Navajo rug on a loom. In my booth I offered a heavy, weathered Dayak statue of a sitting nobleman and an animated Dayak sculpture of a hunting dog, as well as collection of Naga shields and spears. My apologies to the African tribal art dealers for not paying more attention to their material. Unfortunately I can’t report on any specific special object. My bad.
As expected during this economic downturn, most of the dealers were apprehensive about attendance and sales. Even in the best of times, the LA market is tepid and it seems we rarely have serious clients from out of town paying even a courtesy visit, so expectations have never been high at this venue for big sales.
However, this year attendance in general was solid, especially on Friday and Saturday and I had the pleasure of meeting with at least a few important buyers that made their way from the Bay Area and Europe to check out the goods. I also met with several enthusiastic new visitors to this show.
Although my own sales were modest, as I’m sure it was for most of the dealers, some did experience big sales, especially on opening night. Michael Hamson sold his log drum, Primary Source sold the Tau-Tau, Bill Sutterfield sold very well, as did Jeff Appleby (CA), to name a few. These sales certainly indicate that serious buyers do attend which gives me hope that this show will survive and perhaps flourish.
It is always hard to gauge the success of a show by the amount of direct sales. For example, my sales rarely amount to much during the show, but in each of the last few years, I met at least one very interesting new client that came through with one or more serious purchases within a few months. Regardless, these shows are really the only way for large groups of potential collectors to view and enjoy high quality authentic examples of tribal art, that they can actually own. It also gives dealers a better opportunity to educate potential collectors and to directly discuss the merits of each piece.
I don’t want to forget to thank the show producers and their team: Bill, Liz, Netanya, Filomena, Steven, Clare, Bob, Agnes, and Treanne for all of their hard work putting this together.
Posted by asiaart at 2:49 PM