ANCESTORS OF THE LAKE:
Art of Lake Sentani and Humboldt Bay, New Guinea
May 6 to August 28, 2011
The Menil Collection, Houston, TX 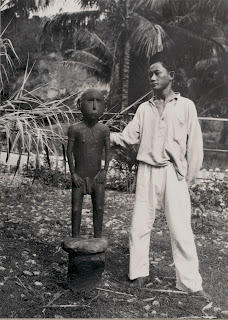 Features 50 objects, including a group of highly stylized and abstracted wooden sculptures and decorative bark cloths.  Many of these works of art were acquired by two pioneering visitors to the region: Swiss explorer, ethnologist, photographer, and collector Paul Wirz and French adventurer, art dealer, photographer, and author Jacques Viot, both active during a notable period of research and collecting that began in 1921.

Curated by Virginia-Lee Webb, an art historian specializing in non-Western art and a former curator at the Metropolitan Museum of Art in New York, Ancestors of the Lake juxtaposes selections from the Menil's permanent holdings with pieces borrowed from public and private collections in Australia, Europe, and the United States.

Ancestors of the Lake is accompanied by an extraordinary catalogue, edited by Virginia-Lee Webb, including essays by leading scholars as well as historical photographs of Lake Sentani and Humboldt Bay.  The 128-page volume features new scholarship on Western explorations of northern New Guinea, including Viot's journey as well as stills by Man Ray. 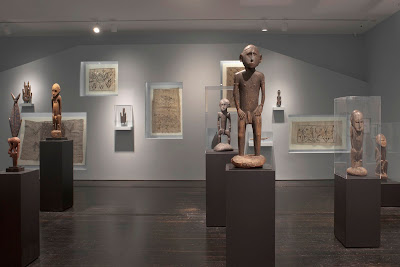 This amazing carpet, the center piece to the "Gifts of the Sultan: The Arts of Giving at the Islamic Courts", is on display until Labor Day, 2011.  One of the two greatest Persian carpets ever woven (its twin is in the Victoria and Albert Museum, London), this is only the 5th time it has been shown since its debut in 1965.  Don't miss this chance to view a true "magic" carpet as well as the stunning display of Islamic art in the rest of the exhibition.
For details, please go to: www.lacma.org.